diff What is it? ？diff It's just comparing two trees ,render It'll make two trees , A new tree newVnode, An old tree oldVnode, Then the two trees are compared and updated to find the difference diff, Full name difference, stay vue Inside diff The algorithm is through patch Function to complete , So sometimes it's called patch Algorithm

diff When did it happen ？ Of course, we can say that it happens when the data is updated diff, Because data updates will run render Function gets virtual dom Trees , Finally, the page is re rendered .

When a component is created , When the properties or data on which the component depends change , Will run a function ( In the following code updateComponent), This function does two things ：

The core code is as follows , It's different from the original code , But it's almost the same , It means ：

diff It happened in _update Function is running

Call... First in the code _render Function gets virtual dom The root node , Then incoming _update Function , Will be updateComponent Pass in Watcher in ,watcher Can listen to the process of function execution , Monitor what responsive data is used during function execution and collect dependencies , About watcher Take a look at my last article ： One article for you to understand vue2 The principle of response

_update What are functions doing ？

If you only consider updating the virtual dom Trees , This step has been completed , But the ultimate goal is to update the page , So we need diff Compare the nodes of the tree , So you can save the old trees oldVnode For comparison

contrast oldVnode and vnode That's it , The purpose of comparison is to update the reality dom

Next , Can judge old trees oldVnode Whether there is ： 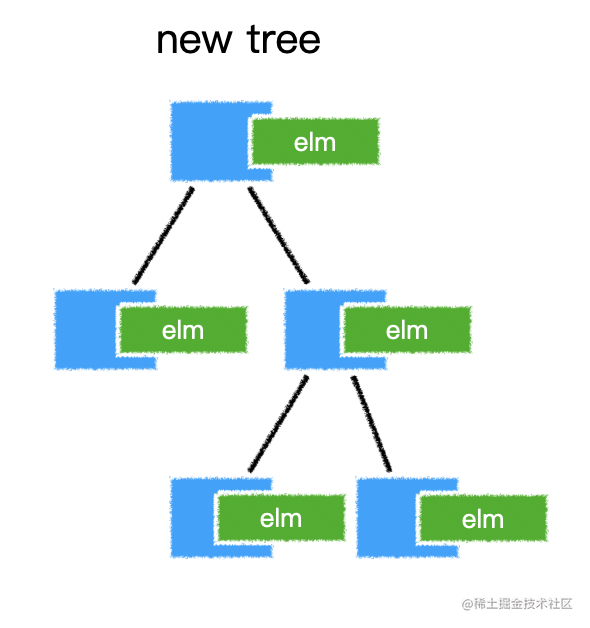 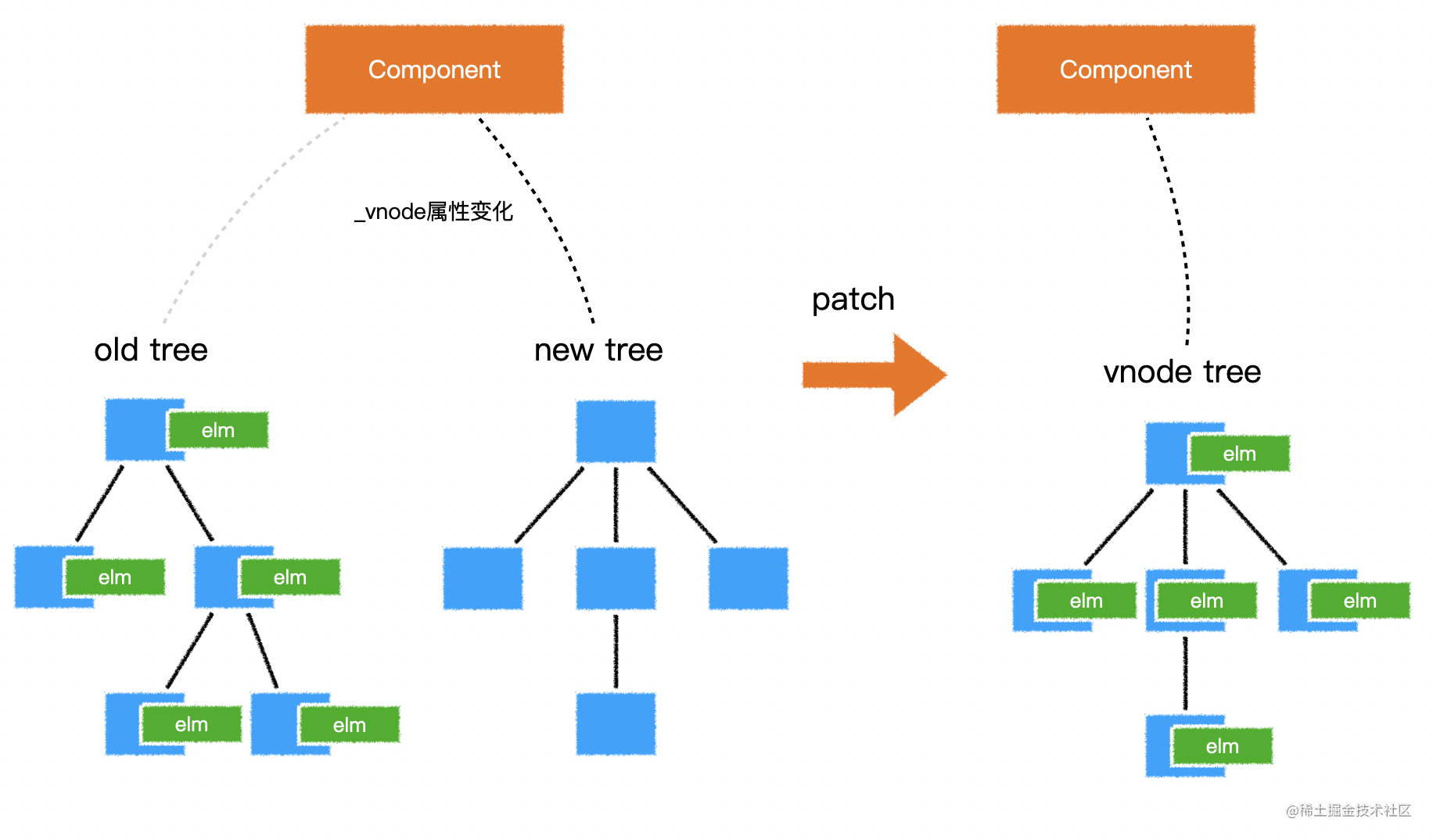 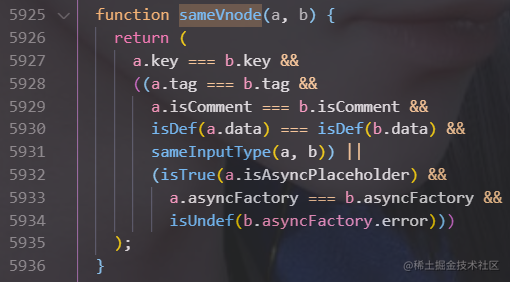 example ： Two virtual nodes div Are they the same?

Label types are div,key It's not just about v-for Ergodic , It can also be used in any label , The top two div There is no key value , So all for undefined, So label types and key It's the same value , It doesn't matter if the content is the same , It's another node ： Text node

The above two virtual nodes are different , because input It's not just about key Value and label type , Also look at type Are they the same?

2.「 New element 」： According to the information provided by a virtual node , Create a reality dom Elements , At the same time mount to the virtual node elm Attribute

5.「 Compare child nodes 」： It refers to comparing the children of two virtual nodes , The specific process will be described later 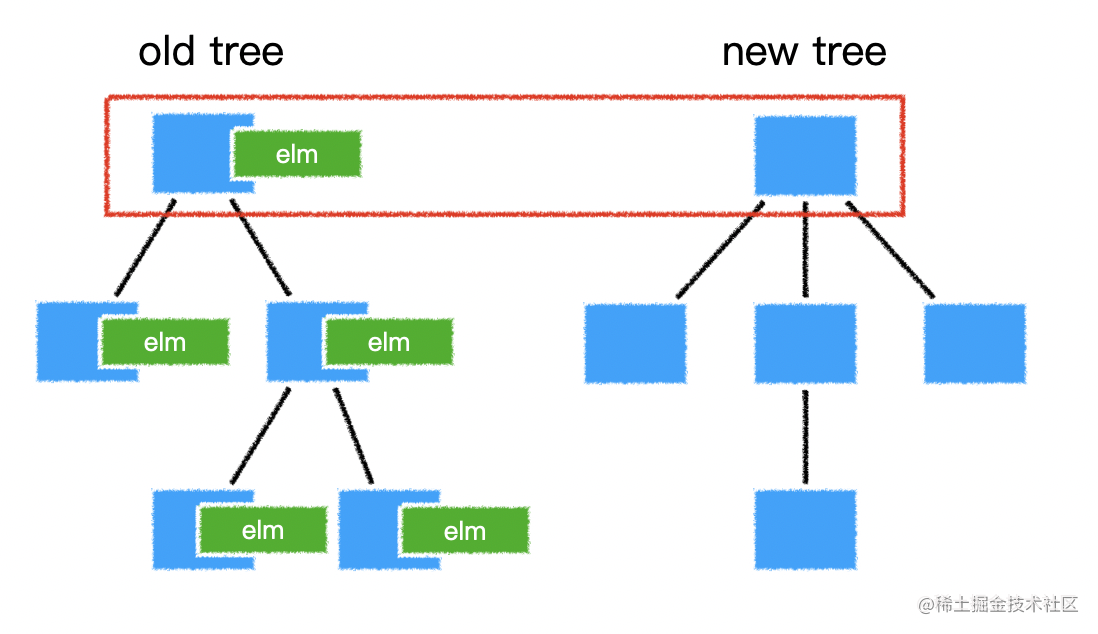 fictitious dom The tree has finished , It's just the real thing dom 了 , But it's true dom It's time-consuming ,vue Our principle is to not change if we can , Try not to do anything , stay 「 Compare child nodes 」 when ,vue The starting point of everything , Is for the ： 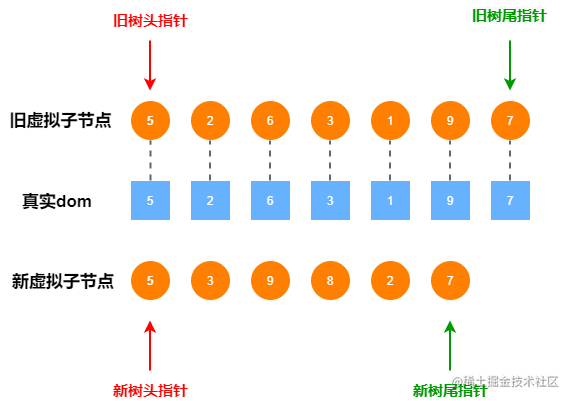 Next , All we have to do is compare Old child nodes and New child nodes Between differences , The goal is to change real dom, And the new virtual child node is mapped to the real dom Go inside ,vue Use two pointers to the head and tail of the new and old child tree 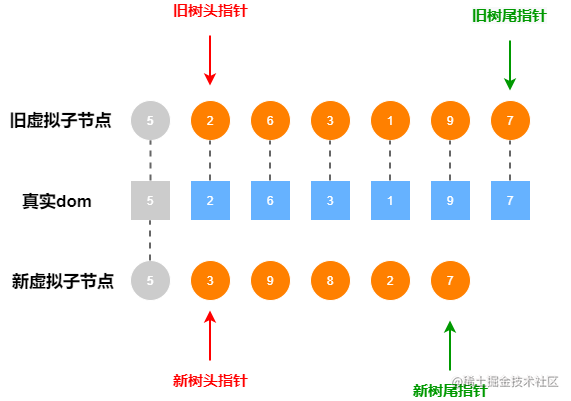 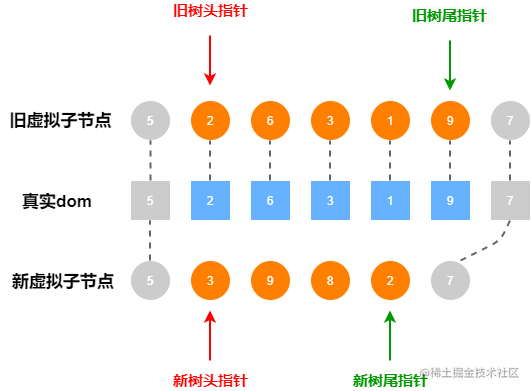 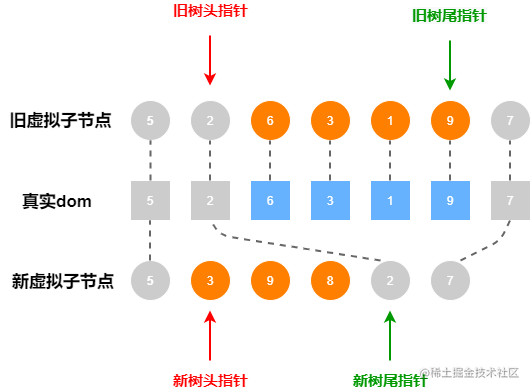 What we should pay attention to here is the truth dom It must correspond to the new virtual child node one by one , So in addition to updating and changing places, we have to carry out Position shifting , Move to the back of the old tree tail pointer , Finally, the old tree head pointer moves back , At the end of the new tree, the pointer moves forward , Here's the picture ： 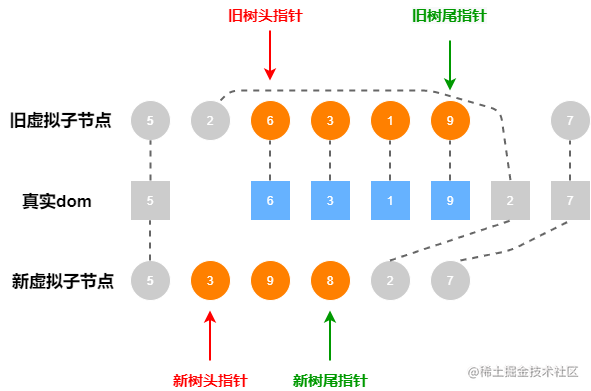 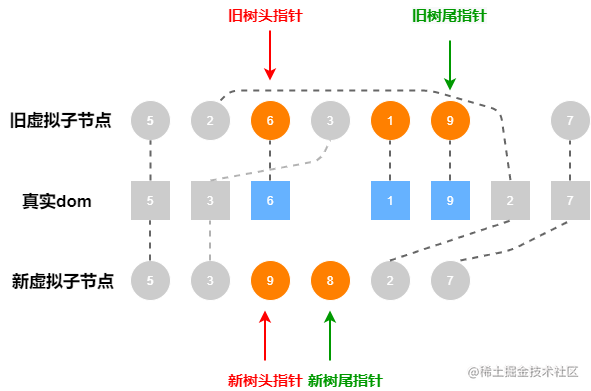 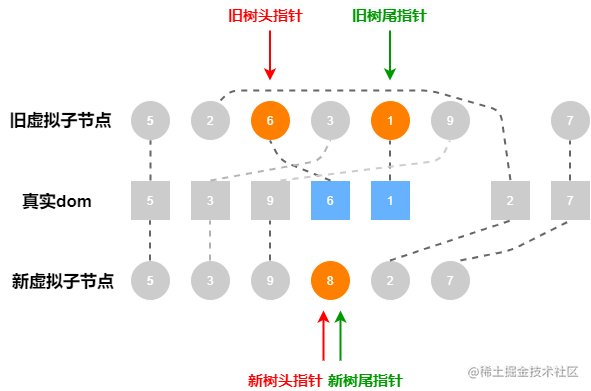 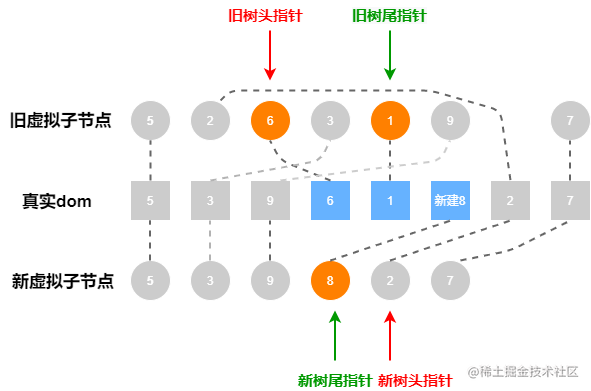 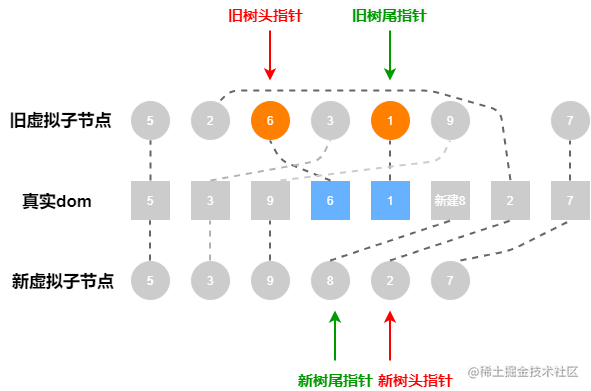 It's true in the end dom Generation completed , We only created one new element in the whole process , Here's the picture ：

During the interview, I will also be asked about diff The problem of algorithm , Here is the reference answer ：

Okay , That's what I share , Everyone for diff Algorithm There are other understandings that can be discussed in the comments section ～

I hope you like it Give me a hand ～ , I'll be more motivated